Greetings and welcome to our Beatty Alumni Website. How swiftly time has flown! Beatty Secondary School and the Beatty Alumni celebrated their 65th and 25th years of founding respectively in 2018.

15th June was the date of Beatty Alumni’s 26th Annual General Meeting with the agenda including election of Management Committee for term 2019 to 2021.

Another milestone was reached in our Alumni history when I was re-elected as the first female president to lead the Beatty Alumni Management Committee (BAMC) for 4 consecutive terms, from 2013 to 2021.

The committee line up is appended with their names, cohort and photos.

This prestigious honour is indeed a blessing and motivating force for me to work even more closely with the BAMC team and key stakeholders in steering our alma mater to greater heights.

It is notable that we have a balanced mix of senior and junior BA members in the committee. We have Mr Mun Chor Seng from the Pioneer Generation, Patrick, Michael, Lawrence and myself from the Merdeka generation , as well as BA Life members from 1990 & 1980s – Katheryn Tan and Brixton Jeou as well as the millennial cohort – Cheryl and Rafiee.

The success of the BAMC is made possible with strong support from key stakeholders, namely past and present School Leaders, the School Advisory Committee, Beatty Alumni comrades and last but not least, the teaching and non-teaching staff of Beatty.

Special mention goes to our Patron, Mr Low Cheng Lum for his unwavering and generous support. He has contributed to the establishment of the Low Cheng Lum Annual Scholarship Award and financially supported in students’ academic development. In addition, he has also generously sponsored many events, such as the school’s 65th and alumni’s 25th Silver Jubilee celebration events, just to name a few.

Since its humble inauguration in 1993, our Alumni has come a long way in nurturing comradeship and the Beatty Family spirit since yesterday, which remains today and will certainly flourish tomorrow.

We will always do our best to bring glory to Beatty.
Non Vi Sed Arte – Not with Force, but with Skill! 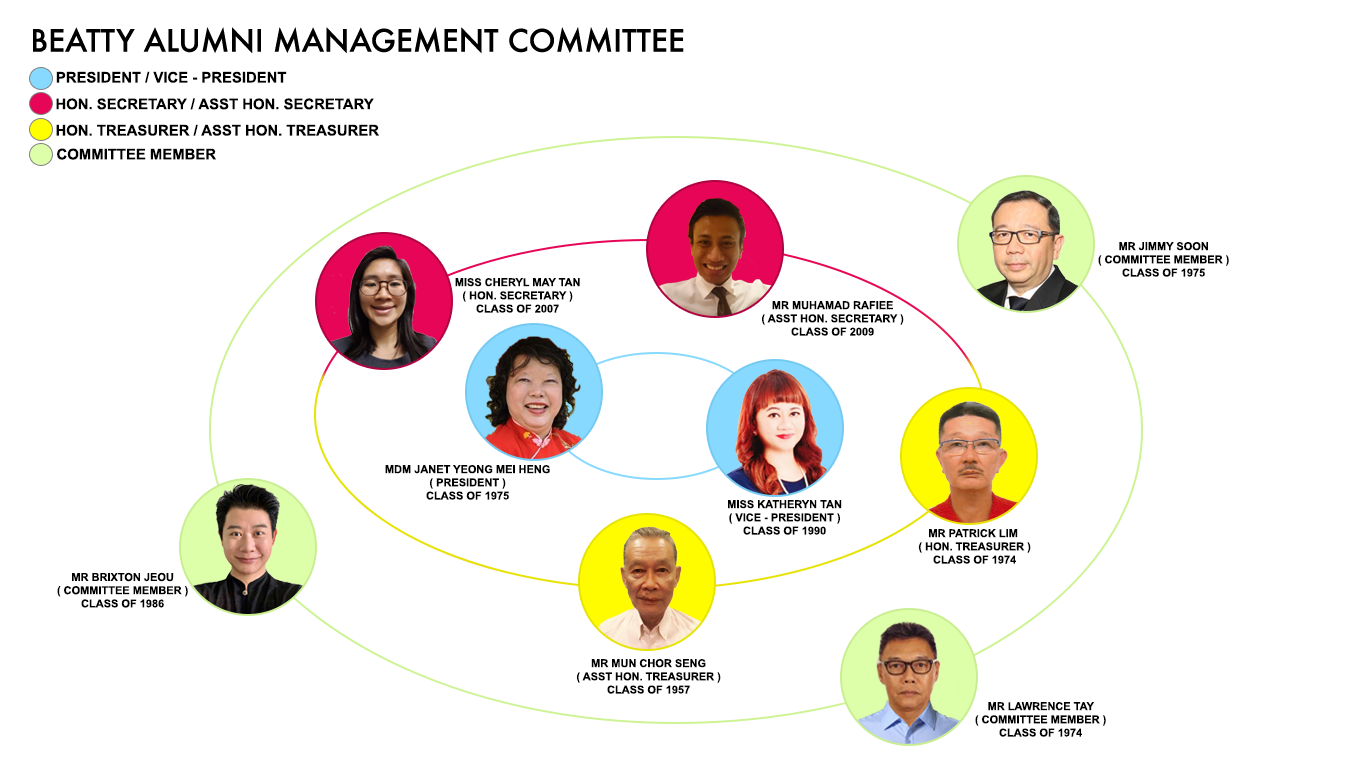